learn more · get involved
Earth Species Project
We are an open-source collaborative and nonprofit dedicated to decoding animal communication. 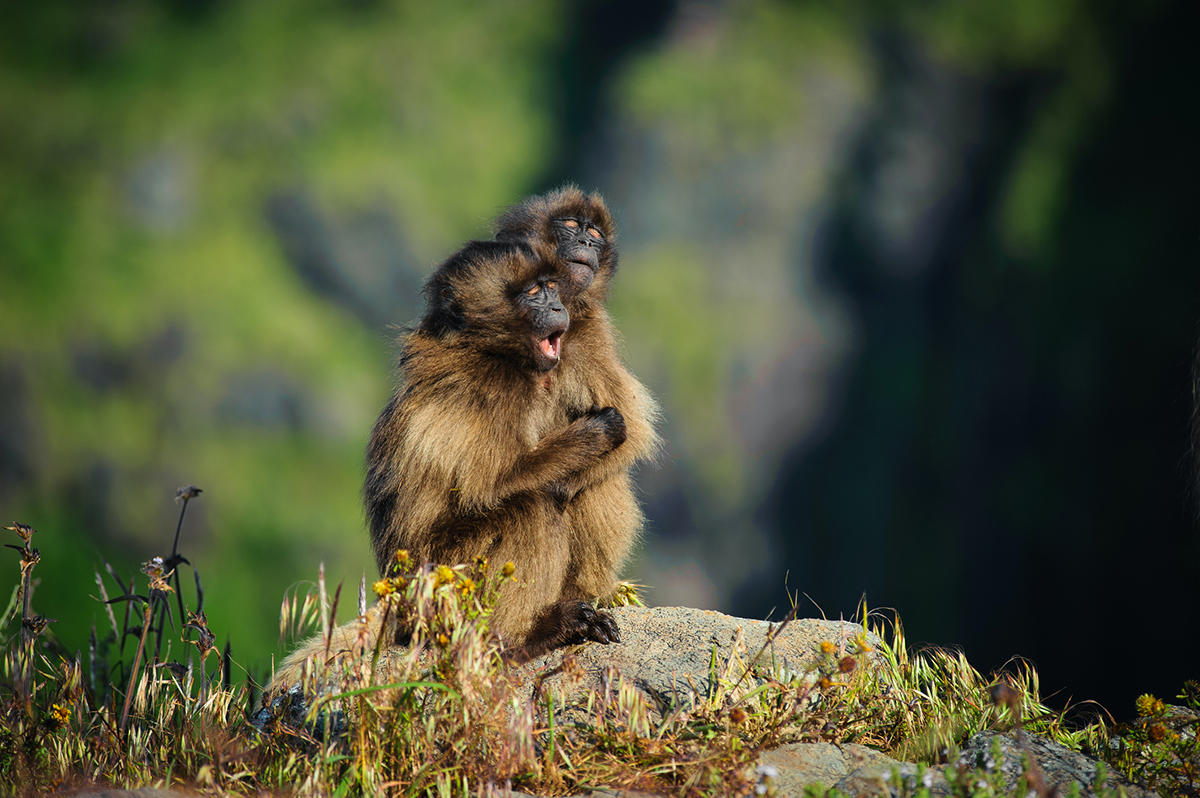 Two sibling Gelada Monkeys (Theropithecus Gelada) Location: Simien Mountains National Park, Ethiopia Photo: Marc Guitard
We believe that an understanding of non-human languages will change our ecological impact on this planet.
We are inspired by the incredible diversity of communication systems on Earth. From the mycelial networks that connect Earth’s forests like an Internet to the rainbow-rave richness of cuttlefish communication, we are surrounded by messages and meaning.
‍
We are motivated by the recent monumental milestone in machine learning: the invention of techniques that can translate languages without dictionaries.
‍
Like the telescope, these new tools will forever change our perspective.
Our technical roadmap is available on Github. 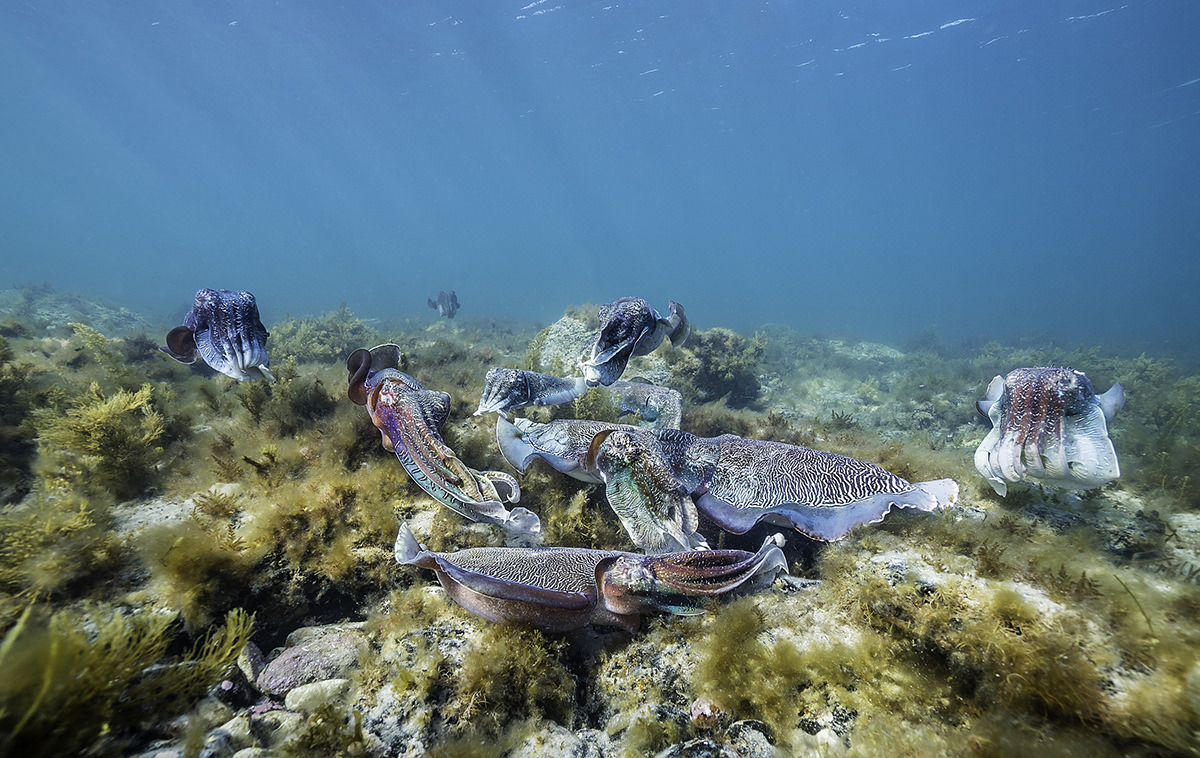 Britt Selvitelle and Aza Raskin met in 2007. At the time, Britt was on the founding team at Twitter and Aza was helping start Mozilla Labs. They instantly connected over their shared curiosity and respect for how technology changes the way we relate to ourselves, each other, and the natural world. They’ve stayed close ever since.
In 2013, the seed for the Earth Species Project was planted when Aza first heard an NPR story on the uncannily human-like vocalizations of the Gelada monkey. Thore Bergman, the evolutionary biologist at University of Michigan heading the study, described it:
“We noticed sounds like people were talking around you. Most primates only make a few sounds, but geladas produce a complex stream with a rhythm similar to language.”
— Hints of Human Language Heard in Lip-Smacking Monkey Talk, Wired, April 8, 2013
Also in 2013, Britt and Aza became aware of a new machine learning technique that could learn a geometric representation of an entire language, like a galaxy where each star is a word and the distance and direction between stars encodes relational meaning.

The geometric shape of English, or at least its top 10,000 most spoken words. This shape is actually in hundreds of dimensions. This structure is known as a “latent space”.
By 2017, we were meeting once a week to figure out how to fit the puzzle pieces together. We discovered two recently published papers demonstrating a machine learning milestone: techniques to translate an unknown language without the help of a single example.
‍
The insight: not only can languages be represented as geometric structures, they can also be translated by matching their structures to each other.
‍
Inspired by the work of numerous ethologists and researchers, we left our computers (mostly) to venture into the field and learn firsthand from those with decades of wisdom in bioacoustics and animal communication.
‍
Since then, we’ve begun work on cetacean communication. Over time our focus will broaden to include primates, corvids, and others.
‍
We founded the Earth Species Project in the vein of the organizations whose values and impact in the world have inspired us, like the Internet Archive and Mozilla.
‍
We are a 501(c)3 nonprofit and are committed to releasing all of our work in the open and towards public benefit.
You can read more on the technical details or follow along and contribute on Github.
The Humans
We are thinkers, makers, artificial intelligence engineers, conservation technologists, learners, entrepreneurs, and artists who deeply care about the interdependent future of our planet and its species.
Aza Raskin, Cofounder (Executive Director)

Trained as a mathematician and dark matter physicist, Aza is also the cofounder for the Center for Humane Technology. He has taken three companies from founding to acquisition, is the co-host for the popular podcast Your Undivided Attention, a co-chairing member of the World Economic Forum’s Global AI Counsel, helped found Mozilla Labs, in addition to being named FastCompany’s Master of Design, and listed on Forbes and Inc Magazines 30-under-30.

Computer scientist, animal rights activist, and philanthropist, Britt Selvitelle was part of the founding team at Twitter, growing the company from birth to thousands of employees. His work has led to major social change from drug policy reform to increased animal rights. Britt is focused on how humans can become better listeners.

Trained as a mathematician and dark matter physicist, Aza is also the cofounder for the Center for Humane Technology. He has taken three companies from founding to acquisition, is the co-host for the popular podcast Your Undivided Attention, a co-chairing member of the World Economic Forum’s Global AI Counsel, helped found Mozilla Labs, in addition to being listed on the Forbes and Inc Magazines 30-under-30, FastCompany’s Master of Design.

Computer scientist, animal rights activist, and philanthropist, Britt Selvitelle was part of the founding team at Twitter, growing the company from birth to thousands of employees. His work has led to major social change from drug policy reform to increased animal rights. Britt is focused on how humans can become better listeners.

Katie is a product expert and conservationist focused on biodiversity. As one of Facebook’s earliest employees in New York, she launched many of the site’s foundational elements. Since then, Katie has created technology solutions for the front lines of conservation biology including wildlife veterinarians, biologists, and park rangers. In 2019, she was honored with the Next Generation Conservationist Award by The International Seakeepers Society for her work in conversation technology and public education.

Prior to Earth Species Project, Rebecca was the Head of Operations at a blockchain startup and before that an analyst at the Environmental Defense Fund. She received her B.A. in Ecology and Evolutionary Biology from Princeton University, where her thesis involved animal fieldwork and socioeconomic research in Costa Rica to understand drivers of successful forest conservation.

Radek is the author of many popular machine learning tutorials and posts, a Kaggle competition winner, and core member of the fast.ai community. He has previously contracted with numerous startups, with a focus on multilabel image classification, language modeling, text generation, named entity recognition, and knowledge graph augmentation.

Roee worked for Facebook AI Research on real time music style transfer, founded a Y-Combinator backed startup in gesture control, and prototyped software for what became the Microsoft Kinect at PrimeSense.
‍
Over the years he’s come to realize that in order to blur the lines between humans and technology, you need to know computers well and humans better. Recently he has been generalizing  this understanding on other earth species.

Peter received his BA and MA in Physics from Harvard University after completing his final semester at Woods Hole Oceanographic Institution. While in college and shortly after graduating, he worked on a number of bioacoustics projects, including a research collaboration exploring the application of machine learning to sperm whale clicks as well as an expedition to study humpback whale vocalizations in Mooloolaba, Australia. He has a keen interest in developing advanced computational techniques in an effort to improve conservation and management strategies to protect our earth’s species.

Stay up to date

A short email when something is worth sharing.
Thank you! We'll keep you updated!
Oops! Something went wrong while sending us your email! Please check to make sure there are no typos and try again.